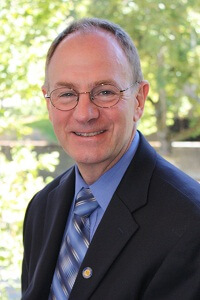 Dr. Dennis Lindsay came to Bushnell University in 2000 as an associate professor and chair of the Biblical studies department. He became the associate dean of arts and sciences in 2003 and was named vice president for academic affairs and dean of the faculty in September 2005.

Before coming to Bushnell, Lindsay was college principal and bible lecturer at Springdale College in Birmingham, England. His experience of cross-cultural ministry and missions during his 15 years in Germany, Britain, and Central Europe gave him a deep appreciation for the world church and a strong sense of the urgency of Christian missions. In addition to his academic background, Lindsay is an ordained minister and has held pastoral ministry positions in the USA and Germany. He has preached and lectured on several occasions in Poland and Lithuania and is a visiting professor for the Institute of Biblical Studies in Vienna, Austria.

Dennis is a member of Central Lutheran Church in Eugene, where he regularly serves as assisting minister and member of the planning committee for the annual Chi Rho Lecture series. He is often invited as a guest preacher in the Eugene area. Dennis and his wife Karen were married in St. Moritz, Switzerland, and they have one daughter, Mia Shu Lindsay. The Lindsays reside in Eugene.