Please fill out this feedback survey to help us improve the Sacred Art of Nursing project further.

This project was part of the Council of Independent Colleges Humanities for the Public Good (that was scheduled for 2019), but due to the pandemic was postponed until Fall 2021. That is when the bulk of the research work began.

Bushnell University in Eugene, Oregon was first founded as a divinity school (1895). It was then called: Eugene Divinity School and it was strategically adjacent to the University of Oregon. The founder, first president of the Eugene Divinity School was Eugene Sanderson.  According to Myers (1948), Sanderson- “became convinced that the best plan for the church was to co-operate with the state university rather than try to compete with it.”

The purpose of this research is to see the coordination of benevolence and healing in this specific community from various Christian organizations and histories. From this purpose, various questions surfaced that helped clarify the main research question, which is:

Why did the Christian college in Eugene Oregon, build a hospital in the 1920s?  What was the context, its motivation, and goals? What was the result?  Why and how was the hospital sold to the Sisters of St. Joseph of Peace?

We learned that the Pacific Christian Hospital was linked to another organization called the International Bible Mission. Eugene Sanderson was also the president of this newly developed “umbrella” organization. 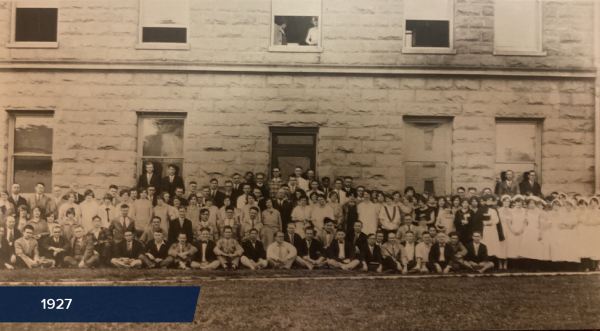 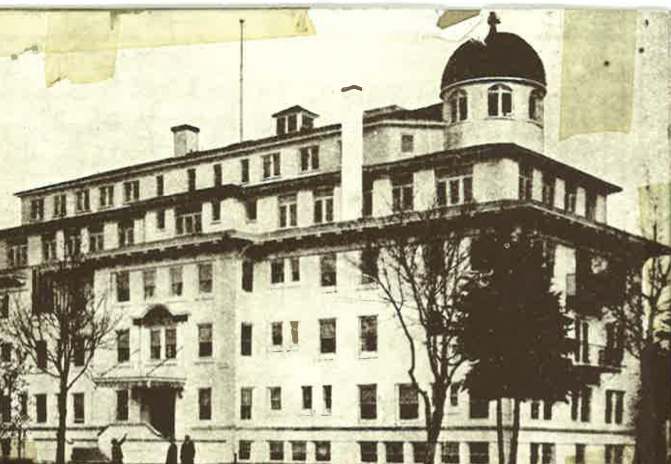 The secondary literature on this topic is based upon three unpublished MA theses along with a published book called: Crusaders for Christ. This provided various background to Bushnell’s history and the life, work, and personality of Eugene Sanderson.  Sacred Heart also has various published histories as well.

Prior to taking his role in higher education, Sanderson was known as an evangelist, church planter, and a pastor in both Washington and Idaho. President Sanderson had a vision of placing Bible colleges near as many state schools as he possibly could in order to link Biblical studies with the liberal arts and provide a more complete education for students through cooperation between secular schools and Bible colleges. The legacy of Eugene Sanderson is a great one, and there are universities all around the country to this day that still carry on his work and vision, that without his foresight, would not exist today.

A Christian Calling “for Volunteers” 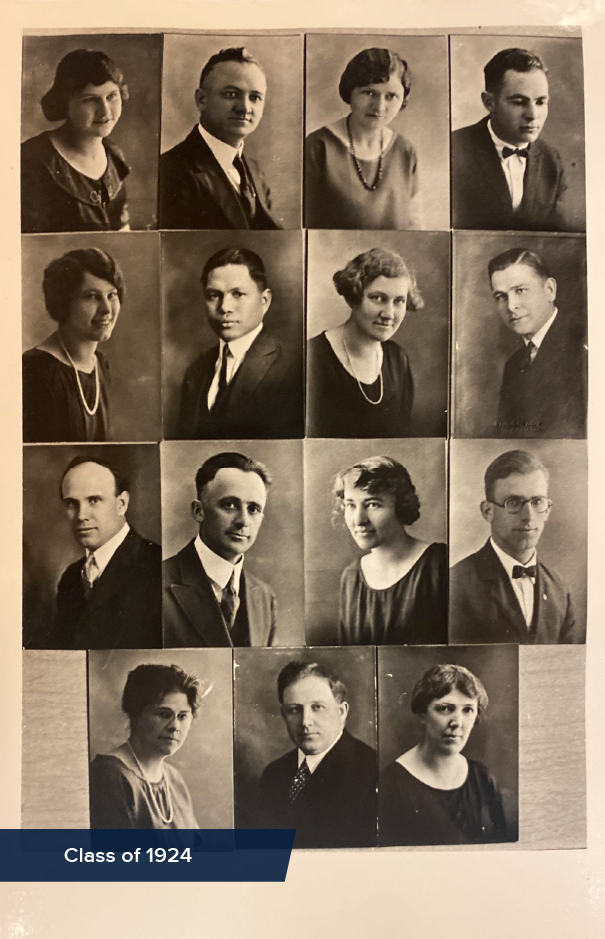 This story is certainly about Eugene Sanderson, but it is also about others like Walter Myers, who served this intuition faithfully during the time of Sanderson, but also after Sanderson’s quick resignation in the later part of the 1920s.

The concept of vocation and calling at Bushnell University is theological, biblical, and rooted in a deep history of this institution.  For example, we discovered that in 1919, Rev. Walter Myers of the then Eugene Bible University published in the Christian Journal- an important call for what he called: “Christian volunteers”. 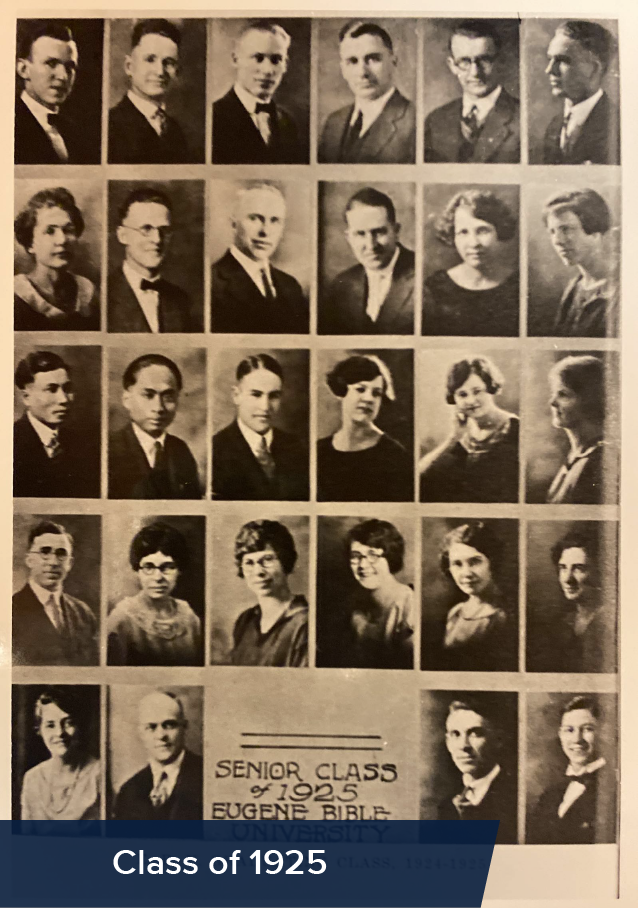 This specific article provides excellent illustration to both calling and vocation from a Christian perspective. For Myers it was a Christian call, with various applications….it was a call for Christian volunteers to address “poverty, disease, and suffering,” and “the dying.” It was the call to issues related to- “degraded womanhood,” particularly, “the widows of war,” “ill treatment,” and “abuses”. For Myers, the calling was also to education: to teach reading and literacy, and a call to address “ignorance”, and a call to address those who have been “oppressed”.

Rev. Walter Myers concludes: “What and who shall answer the call?”. A Christian theology of ministry, well at least from this perspective, includes ministry of the church, certainly, but also ministry to the poor, to the widows, to the orphans, and to those suffering from disease and death. It is also a calling of healing others. 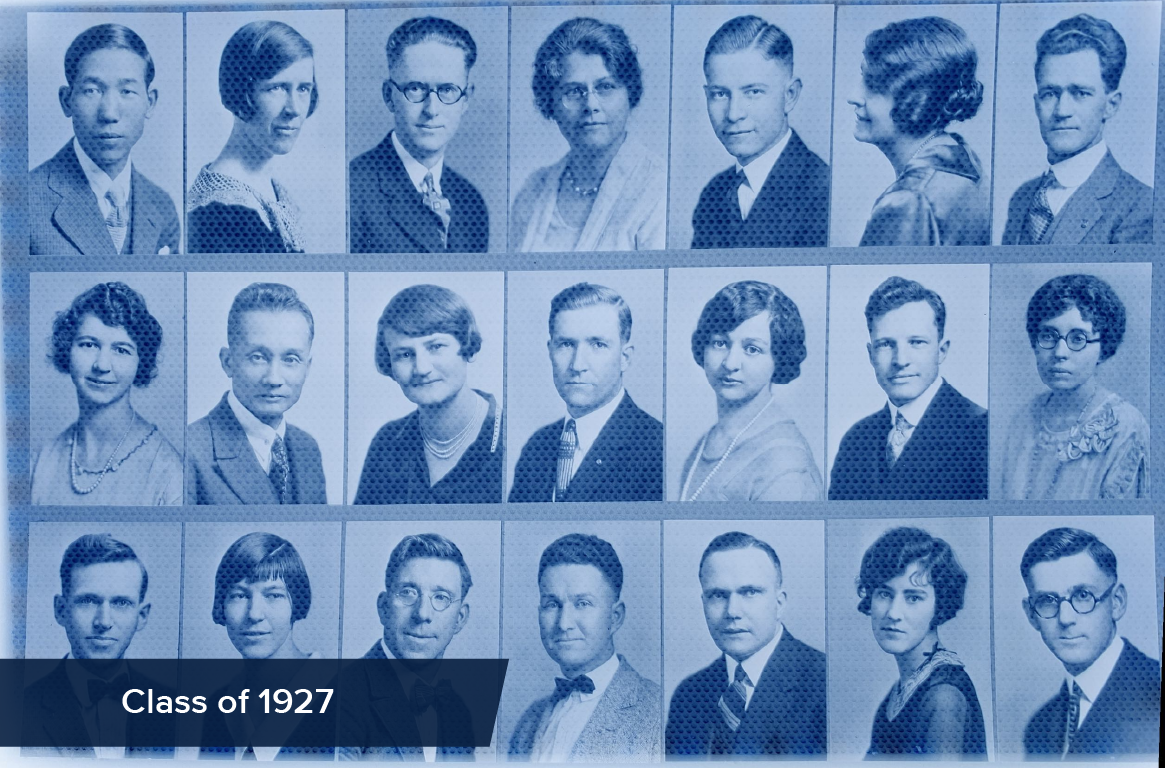 This was in 1919 and it is an important context of calling and ministries of what transpires next. Goodrich states that in July of 1922 the Board of Trustees for EBU, “launched plans to establish a Hospital” and “inaugurate a half-million dollar campaign…” (p. 141).  It was “argued that the hospital would add to the welfare of the students and open channels of Christian services….[and] Community cooperation” (Goodrich, p. 141).  Construction of the “Pacific Christian Hospital began in 1923 [and was then] “well equipped,” “ably staffed” and “dedicated in 1924” (Goodrich, p. 141). EBU would then operate a Nurses Training program at the hospital. 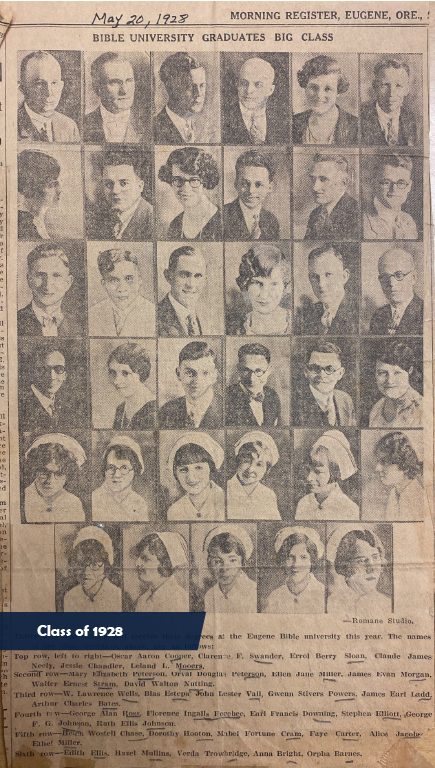 The Christian Journal of the institution concludes that the hospital’s mission is simple: the mission is “being Christ-like” (p. 2).  By 1922, the public announcement of this new: Pacific Christian Hospital described it as an: “act of Christian Benevolence,” and that the hospital is now: “a visible expression of the spirit of Jesus among the churches of Christ” to “aid those in physical need (1924, p. 15). It was based upon a dedication to serve individuals suffering and to provide a “hand of mercy” in the “sacred art of Christian nursing” (1924, p. 15). The article concludes that the “physical material of construction is concrete. The spirit of the institution is from above, and doctrinally it is founded upon the Rock” (p. 15).

Will You Build Hospital? Yes, We will called it: “Pacific Christian Hospital”

An event was held on October 9, 1922, that gathered more than 200 “leading merchants, attorneys, physicians, educators, bankers” to consider the funding of a local hospital. From a historical perspective, it is important to note who made the address at this event: President Prince Lucien Campbell the then president of the now University of Oregon and President Eugene Sanderson the then president of the now Bushnell University. The Christian Journal (1922) reports that “speeches showed the need of the hospital from the standpoint of the community, the state and the Pacific Coast…[its] mission being Christ-like was mentioned by several different entities. The concept of building buildings was not new to President Sanderson.  He was known as a capable leader with vast vision and the ability to activate others to create protestant institutions. Eventually, the Pacific Christian Hospital was built at the location of 12th and Hilyard in Eugene. 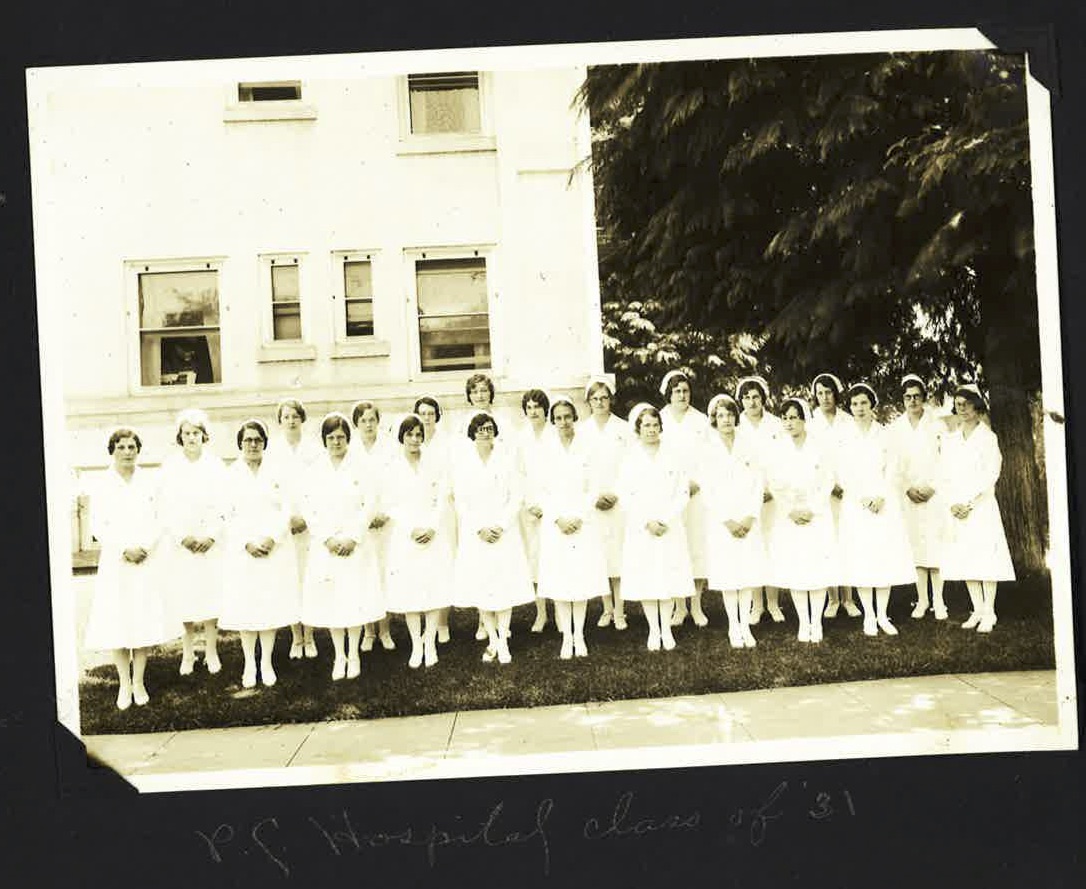 But, Why a Hospital? Answer: Nursing Training and Community Healing

The “Training School for Nurses” was described as being “conducted in connection with the Pacific Christian Hospital, one block from the main campus of Eugene Bible University…Here Christian young women who wish to devote their lives to the ministry of healing, either in the foreign field or the homeland, may acquire their training in a Christian institution and under Christian leadership. Pacific Christian Hospital was opened for service March 17, 1924.
It was a “new and thoroughly modern hospital, building and equipping had a cost of more than two hundred twenty thousand dollars and the cost of tuition for courses was $50 per year.”

The research question for this project takes a deeper dive into the nature of Christian education generally and the saga that unfolds with the building of a new hospital that became a financial disaster a few years later. 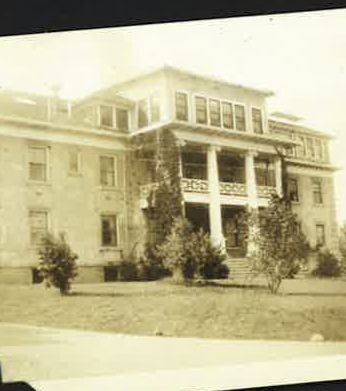 The Healing Hands of the Sisters of St. Joseph of Peace

From the perspective of EBU, from 1928 to 1933 the saga is that of financial distress, receivership, and bond investors looking for liquidated funds. In all of this financial distress, the leadership of Rev. Walter Myers is clearly on display as his duty was to ensure the success and survival of EBU.

Largely, this is a story more about the Sisters of St. Joseph of Peace than that of Pacific Christian Hospital. For it is the ministry of healing by doctors and nurses who help heal others and it is not just about a building.

While much of the history of the: Sister of St. Joseph of Peace has been described and published, the involvement of Eugene Bible University and the International Bible Mission has little awareness (Dewitt, 2016). According to PeachHealth’s own records, “Dr. Emil Furrer … reached out to attract the Sisters who could purchase and run what became Sacred Heart Hospital” (p. 59).

…and, “the mission of both the Sisters and lay leadership is to support and develop those commitments and to find ways to pass on the grounding in Catholic values that is an inheritance PeaceHealth caregivers share- from many different faith perspectives” (p. 115).

Throughout the records, it is clear that the Sisters of Joseph of Peace operated from a theology based upon healing.

This continues today.  For this organization, a healing ministry is a calling of Jesus that is to be carried, carried together, for the peace of others.

Conclusion: A Call to Volunteers for Healing Partnerships

The marketplace of education, including Christian and religious education, is competitive.  In 1925, the values of this institution states: “Monopoly, even in Christian service, is undesirable…the organization of…benevolence…in the very nature of things presupposed that NO human agency, its own or others, has a right to exclusive authority…the best method is: “cooperative Christian service.”

What is better for the public good than that of Christian cooperation in the healing of others?  Healing ministry, from a Christian perspective, is an enterprise that requires the gathering of caregivers who share “many different faith perspectives” (Dewitt, 2016, p. 115). This was true in the 1920s and 30s, but it is also true today.

So, while there are various Christian denominations and theological traditions, the praxis of healing others has been historically ecumenical and led often by Catholic traditions and institutions. The question has now become: how are we to contribute and support in the healing ministry of Jesus and to give others peace during times of suffering?

Will you answer the call to be a: “Christian Volunteer?” 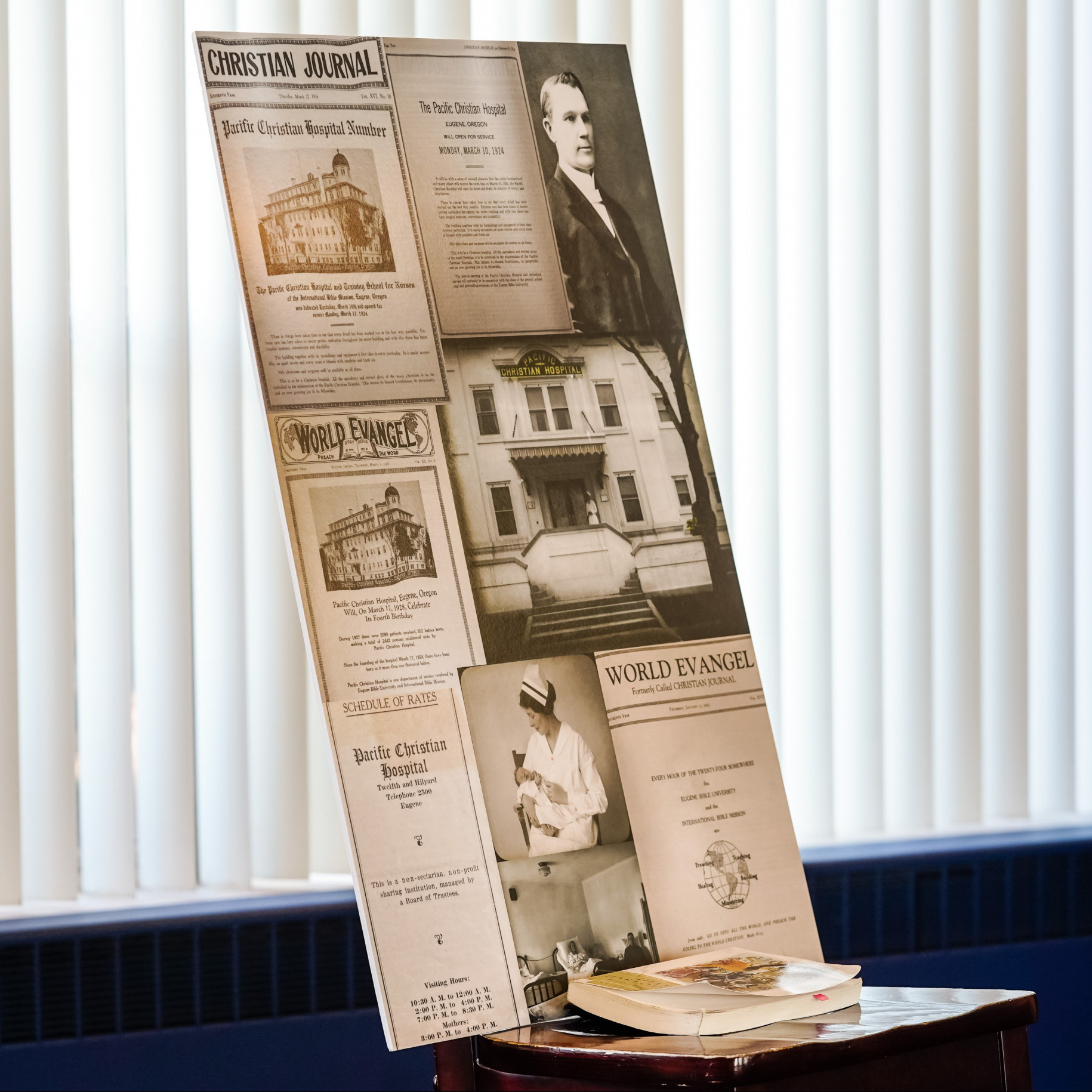 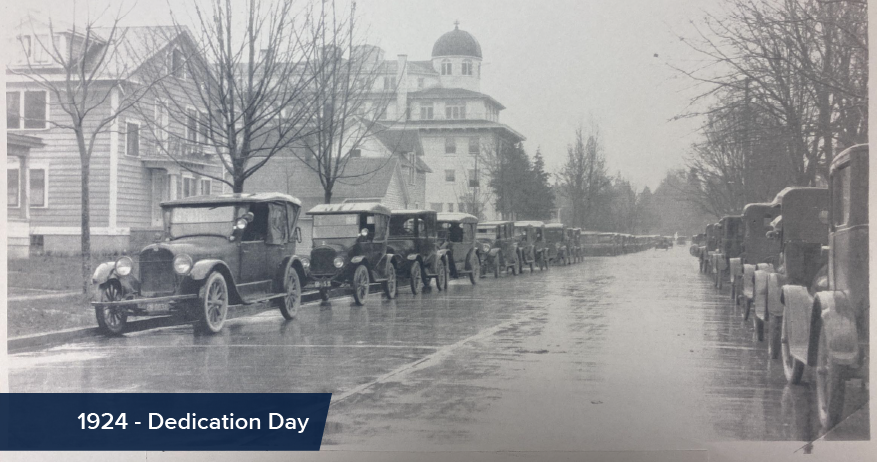